The new releases from October's Portland Retro Gaming Expo are now available to purchase online! In total we have nine new 2600 games, one new 5200 game, and one new 7800 title! You can click on the images below to jump directly to each game's entry in the store.

We also have the AtariVox+ back in stock, which is used by four of the above new games for saving high scores, as well as by Wizard of Wor Arcade to replicate speech from the original arcade game! And, finally, we've added boxes as an option for about 50 games, including last year's new 2600, 5200, and 7800 boxed releases (Dungeon II: Solstice, Mappy, Space Game, Froggie, and RealSports Curling).

Speedball 2 and Fantasy World Dizzy for the Jaguar!

We've just added two new Atari Jaguar titles to the AtariAge Store! We're proud to reveal that Speedball 2: Brutal Deluxe and Fantasy World Dizzy are now available to pre-order. Each game includes a high-quality, professionally printed box, manual and label. Fantasy World Dizzy (like Treasure Island Dizzy before it) is limited to 250 copies. We will be shipping pre-orders for these games as soon as printing for the boxes, manuals and labels is complete, so order today to make sure you're among the first to enjoy them! You can keep abreast of our production progress in this thread in our Atari Jaguar forum. 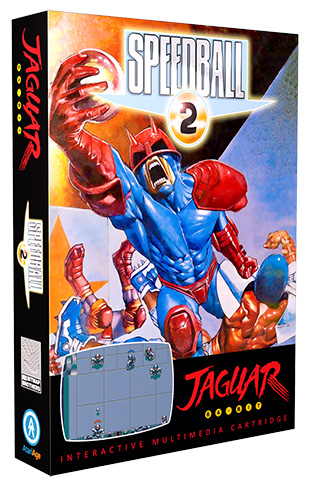 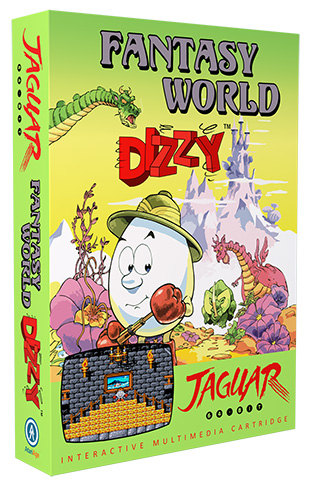 It's been two years since the last ball was thrown on a Speedball pitch. There are new teams, new stadia, and new rules. The arena is bigger, the players are tougher, and the action is faster than ever before.

The challenge is this: take control of Brutal Deluxe, the worst team in Speedball history, and turn them into champions.

Speedball 2 is a different ball game!

Speedball 2: Brutal Deluxe is a video game based on a violent futuristic cyberpunk sport that draws on elements of handball and ice hockey, and rewards violent play as well as goals. The concept of the game is very reminiscent of the 1975 film Rollerball. The original game was developed by Bitmap Brothers and is one of their most successful titles. Originally released for the Atari ST in 1990, Speedball 2: Brutal Deluxe has been ported to a variety of additional systems and has finally made it's way to the Atari Jaguar!

Dizzy & Daisy strolled through the enchanted forest without a care in the world... But suddenly the Evil King's trolls seized poor Daisy! She was sent to the Wizards Weird's Tallest Tower, while Dizzy was dragged away and thrown into the deepest, darkest, dankest of the King's Dungeons in the bowels of Fantasy World.

Dizzy was frightened! Who knew what fate awaited him...and he still hadn't done this week's homework! But then he remembered that he had a fresh green apple that he had planned to give to his teacher to escape detention, and he cheered up. And there was some bread and water on the table!

A cunning plan began to brew in his mind...

Dizzy and The Yolkfolk are characters created by the Oliver Twins, and these characters would appear in many games during the 8 and 16-bit eras. Most of their appearances were in multi-screen platform adventure puzzle games, however, they also appeared in some great arcade games as the title characters.

Slowly, over the course of the series, we learn more about this odd little family and help them out of the tricky situations they find themselves in by visiting the many varied locations of their magical world. Fantasy World Dizzy is our second Dizzy release, following on the heels of Treasure Island Dizzy, which is still available for purchase (get it while supplies last, though!)

We've added some new Atari Jaguar hardware to the AtariAge Store: a reproduction of the Atari Jaguar Pro Controllers and a Mouse Adapter that allows you to use Atari ST and Amiga mice with games that support them (such as Defender of the Crown and Jeff Minter Classics).

Many existing games can take advantage of the additional buttons on the Jaguar Pro Controller, and more homebrews will take advantage of them in the future. And right now four different games include mouse support, with more coming down the road. You can learn more about the above hardware by clicking on the images.

Ever wish there were games that properly used the Atari CX-22 and CX-80 Trak-Balls on the Atari 2600? No need to wish any longer, as we've just added TEN Atari 2600 games that have been modified to use the trak-ball, as well as Atari ST and Amiga mice! Atari didn't release any games for the 2600 that used the proper trak-ball mode on these controllers, but thanks to experienced 2600 coders Thomas Jentzsch and Jeff Johnson, you can now put your Atari trak-ball controller to proper use!

Here are the ten games in the AtariAge Trak-Ball Series. You can click on the individual images to learn more about each game:

You can browse all the trak-ball games here! Enjoy!